In September 2012, Ilana Yurkiewicz reported on a Yale study that analyzed gender bias in the science fields. In the study, scientists reviewed identical resumes for the job of lab manager assistant, half with a man’s name attached and half with a woman’s name attached. According to Yurkiewicz, “Results found that the ‘female’ applicants were rated significantly lower than the ‘males’ in competence, hireability, and whether the scientist would be willing to mentor the student” (Yurkiewicz, 2012).

Our implicit biases are conveyed through our micromessages. Certainly, our students’ self-efficacy and willingness to persevere in a nontraditional or STEM program is greatly impacted by the reception she or he perceives she or he receives in a classroom. We all hold biases (intentionally or unintentionally) within us based upon our history, our cultural interactions, and our family of origins. (We will look at self-efficacy in more detail in Section 4.)

The figure below shows the mutually reinforcing factors that are at play in the transmission and reception of micromessages. 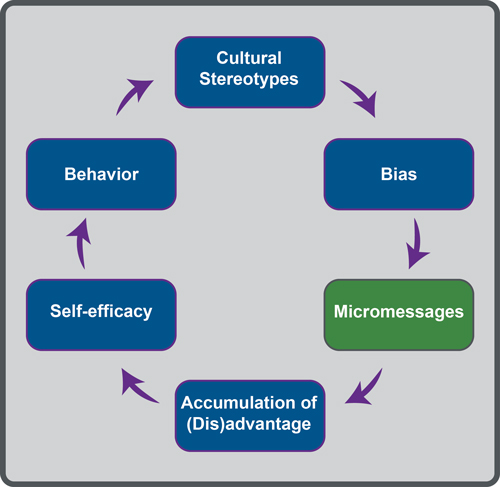 Based on the work of Bernice Sandler, Mary Rowe, and the American Association of University Women (AAUW). Published in Morrell & Parker (2013).

It is only through awareness that we can change our biases, or at least mitigate the impact they may have on students. One way of becoming aware of your own implicit biases is to take part in Harvard University’s Implicit Association Tests (IAT). The IAT tests can be found on the Project Implicit website at www.implicit.harvard.edu. The IAT measures the strength of associations between topics (e.g. gender and science, weight) and judgments (e.g. good or bad) or stereotypes (e.g. bossy, incompetent). The main idea is the closer the association, the faster the response. These are quick and easy tests that can really help you become aware of your own unintended biases.

A link to the Project Implicit page will be included in the list of resources sent to you upon completion of the module.