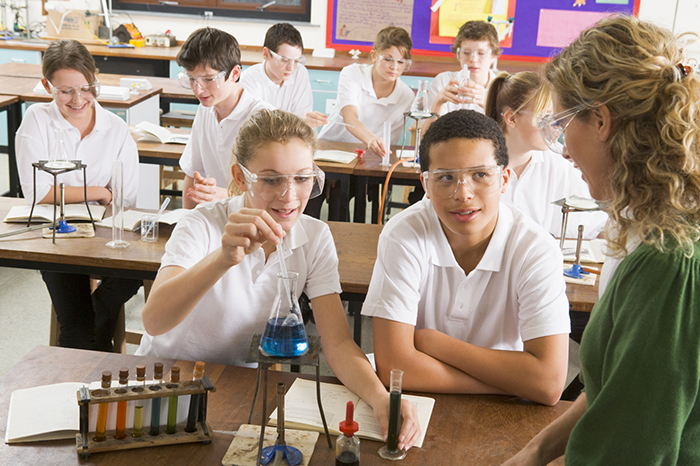 The effects of implicit bias are the primary culprits for steering students away from STEM courses and careers. Internationally, there exists a strong implicit stereotype that associates science with males more than with females [1]; therefore, children conceptualize mathematics and science as “masculine” activities [2].

The cultural bias influences popular literature and media which then reinforce, though often subtly through micromessages, stereotypes that girls lack mathematical and scientific aptitude [3] and that STEM is not for everyone.

The threat of this stereotype encourages girls to feel anxious and less confident in their skills [4], and they may consequently refuse to participate in scientific activities that are incongruent with their gendered identities [5].

This is exacerbated by the fact that females and other underrepresented groups lack the role models necessary to envision themselves in STEM fields [6].

As a result, girls may either lose interest in STEM or seek ways to participate in STEM that are consistent with their gendered stereotypes [7], often electing careers with a stronger social factor.

In summary, math and science and their resulting STEM careers are not gendered, but are perceived to be so because of long withstanding stereotypes and implicit biases. Ultimately, girls are attentive to the behaviors in which women in their culture engage and thus feel efficacious in and model those behaviors [8]. This cycle of stereotypes, bias, micromessages, self-efficacy, and behavior is self-perpetuating unless we begin to consciously change the messages [9].

To combat these images and misunderstanding, we will review key messages about STEM. The three key messages will challenge stereotypes and equip you with effective messaging to interest your students in STEM, regardless of gender, ethnicity, or ability status.

Through concerted efforts to expose students to careers in STEM using terminology that is interesting and appealing, these misconceptions can be reversed [10].

5. Carlone, H., 1999,  Identifying and expanding the meaning of ”scientist’ ‘in school science: Implications for the participation of girls, Paper presented at the annual meeting of the American Educational Research Association, Montreal, Quebec.

Fancsali, C. 2002. What We Know About Girls, STEM and Afterschool Programs. Available from:
http://www.jhuapl.edu/mesa/resources/docs/whatweknow.pdf.